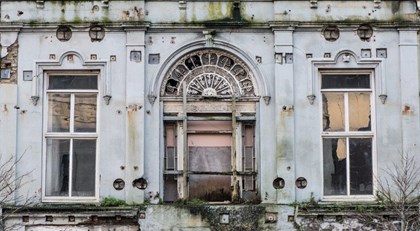 Derham, a curator at  Dublin Castle, has used his extensive knowledge to explore Ireland's photograph archives. He has carefully sifted through thousands of images to find Ireland's lost buildings, from the grand country house to more modest domestic and industrial architecture. Quoted in Archiseek News last month he said 'This book provides a snapshot of some of the buildings from Ireland’s past that haven’t made it to the 21st century, and a couple that have – just about! It will hopefully encourage us to be more aware of what has survived, and to think twice before we let it go, too.'

During the 20th century in particular a vast number of buildings were lost, various factors contributing to the demolition and neglect of buildings, including necessary modernisation of the road network. The Land Commission (dissolved in 1999) designed to re-distribute some ownership of land from landowners to tenants, has been sited as unintentionally causing the biggest loss of rural property with middling to larger country houses abandoned or demolished as estates were split up. At the time the Irish Georgian Society, was described as one of the loan voices alarmed at the loss of some of the country's most beautiful Palladian architecture.