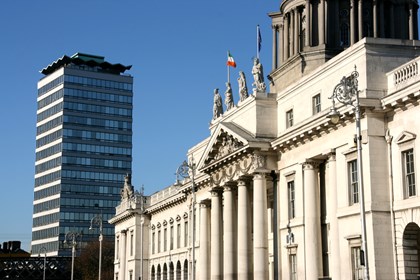 At the end of the this month Dublin's City Council will debate a draft plan outlining how development of the city's built environment can accommodate higher density urban living - the draft City Development Plan will be debated over four days by city councillors.

He points out that 'Dublin is still fortunate to have a relatively low-rise skyline, giving the city an intimate human scale that most visitors find charming.' He admits that while he 'was never a cheerleader for skyscrapers', he is genuinely concerned that new plans for high rise, mid rise and re-defined low rise residential development may 'turn a quite distinctive city into something generic or anonymous.'

There is no doubt that Dublin, like many cities, is under pressure to provide more residential housing stock. High rise developments are proposed for areas such as the Docklands, Heuston, and George's Quay but McDonald argues that the real issue is the proposed re-definition of permitted low rise residential development to bring them inline with commercial low rise developments, currently defined at 28 metres (around 9 storeys) and double the height of a typical Georgian House in Dublin. He compares the proposed Dublin definition of 28 metre residential buildings as 'low rise', to the Canadian city of Toronto, where anything over four storeys is classified as high-rise, and Frankfurt in Germany, where buildings above 20 metres are also classified as high-rise.

Dublin city's residential properties already command some of the highest prices in Europe and if higher density developments become easier to build developers will want to take advantage of the huge potential profits. Frank McDonald's concerns are shared by other Dubliners who want to ensure that Dublin's historic architectural landscape is safeguarded. While some of the city's key Protected Structures are unlikely to be threatened there are real concerns that unlisted historic buildings may be demolished so that more expensive, higher density 'low-rise' residential developments can  be built instead and that this will permanently alter Dublin's unique character.