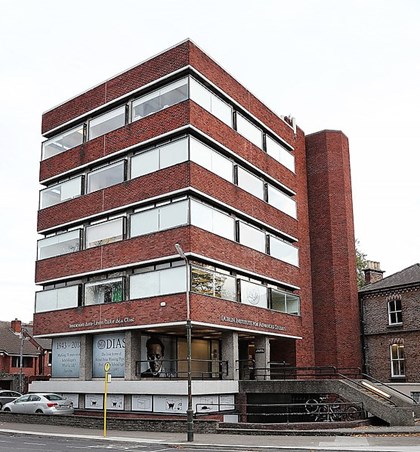 While Ireland is known for its rich built heritage and Dublin for its striking 18th-century architecture few post-war buildings have been included on the country’s Protected Structure Record. Last month it was announced that two 1970s buildings in the centre of Dublin would now be listed.

The first building is the Dublin Institute of Advanced Studies in Burlington Road (pictured right), designed by architect Sam Stephenson in 1971, the second is 24 St Stephen’s Green designed by Ronald Tallon in 1973 for the auctioneers Lisney’s. 24 St Stephen’s Green had won a European Architectural Heritage Award for its design in 1975 but had largely been forgotten as an example of quality period architecture.

Architectural critic, Shane O’Toole, who had campaigned for both buildings to be recognised and listed as important examples of their period was reported in the Irish Times (8 June 2020) to have said that ‘the two early 1970s buildings were “outstanding examples” of their type and he was “absolutely delighted” they now had protected structure status.’

The Dublin Institute of Advanced Studies on Burlington Road was designed specifically as a centre for innovative thinking and includes the School of Theoretical Physics and Celtic studies, so it is perhaps not surprising that when they moved the centre from Merrion Square to Burlington Road the Institute chose a ground-breaking design. 24 St Stephen’s Green has been recognised by Dublin City Council, as an ‘elegant example’ of how modern architecture can be successfully integrated within the city’s 18th-century core, although some critics have pointed out that it was constructed on the site of an earlier regency building that was demolished in the 1960s.